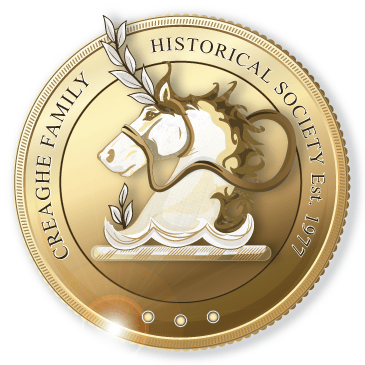 There are several items to report in this edition of the newsletter.  Two new articles have been added to the website.  Under the Ancestors tab, look for the article “St George Creaghe as Sheriff.”  It deals with the part of his life he spent as the sheriff of Apache County, Arizona Territory in the 1890s.  As you will see he was the real thing.  His peers were rather famous interesting guys.  If you went through childhood in the 1950s in the United States, you will have heard of some of them.

The second article, “Percy F.S. Creaghe” was prompted by new information provided Graeme Robertson of Scotland and Patrick Lea of Gosport, England.  There are still big spaces in the biography we have.  Graeme plans a trip to Tristan da Cunha in April and hopefully new information will come to light.  If anyone has information regarding any part of his life, particularly the first thirty-seven years, it would be helpful in filling in the gaps.  Our society owes him a debt for the information he collected and preserved for us (see Family History – Creaghe Family in Ireland – Papers of Percy F.S. Creaghe).

The third and fourth articles came about after Arthur S. Bazán and his first cousin Robert Bazán separately contacted the website. After some preliminaries, we established that we all had a common interest in the Bazán family history. In fact, it turned out that we all had a common great-great-grandfather, Joaquin Alejandro Bazán. Their contributions led to the update of Geraldine Cuneo’s article “Bazán in the New World” (under Family History tab) and a new article examining just what the Brothers Bazán contributed to weaving in Nuevo México. It looks as though that was quite a bit. See “The Bazán Brothers in Nuevo México” under Family History tab.

It is interesting when this crowdsourcing thing gets going. In addition to the information provided by Arthur and Robert Bazán  as well as Diana Cuneo, the Society was contacted by Nicolás Grande, a journalist from Argentina, who was researching John O’Dwyer Creaghe (~1842 – 1920)  along with other well-known anarchists of the  19th century. Whenever I have googled the Creaghe name, John’s name always seems to come up, and I never knew how it fit into our family tree. Based on his information, it seems possible that he is related through Stephen William Creaghe (1805-18540, son of Richard Creaghe DL (d. 1837). Research is ongoing and will be discussed when completed.

I hope you find these articles interesting. If you have any ideas, information, or want to write something yourselves, let me know. Also feel free to note any errors or suggest corrections.