Posted at 03:20h in Artifacts by wpsociety 2 Comments
0 Likes
Share

On our first trip to Ireland in 1998, we started in Dublin where we found one of the several companies that will provide your family’s Arms on a plaque or coffee cup. We were offered one off the shelf represented below. While it is attributed to the Creagh family, the refrain was, “Don’t worry, it will be the same.” So, I bought it. The motto is in Gaelic: “Beirim Daoibh An Craobh”. This translates, roughly, to “I bring the Branch.” The branch is a laurel branch which signifies victory (see Creaghe Family History). 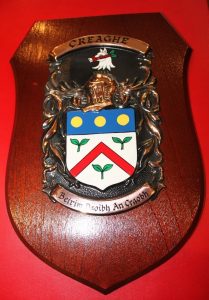 When I first saw the family tomb in Golden latter in the same trip (see below), the Arms did not look the same as the company offered, and the motto was different. However, we were committed. Even though it didn’t feel right, I lived with it: and no further research was done. 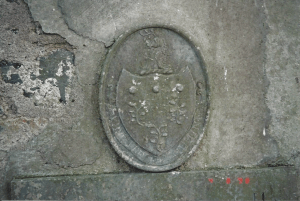 The on a second trip in 2007, we visited the Ennis Friary or Abbey in Ennis, Co. Clare, expecting to find a Creagh tomb. We did; it is the principal item of interest in the ruins (see Sites: Creagh Tomb, Ennis). Lo and behold, the Coat of Arms and Motto were exactly the same as the Golden tomb. An exciting moment. 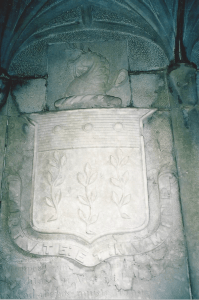 Now inspired, research was in order. It turns out that the key features of the arms are the horse’s head and the laurel branches. All of this comes from a 10th Century battle in which the proto-Creaghe’s, the brothers Pierce, Patrick, and James O’Naill (O’Neill), were instrumental in the expulsion of the Vikings from Limerick in a 968 C.E. battle. The brothers and their men were identified by branches they placed in the headstalls of their horses. “This tradition is, of course, the raison d’ětre of the laurel branches in the Creagh coat of arms and crest” (MacLysaght). The Gaelic word for branch is a form of Craobh, and from that came Creagh or Creaghe (see “Creaghe Family History”).

The next step was translating the Blazon (description) given in Irish Families of the Coat of Arms. Not that easy.

Argent a chevron gules between three laurel braches vert, on a chief azure as many bezants.

Crest: a horse’s head eased argent caparisoned gules in the headstall of the bridle a laurel branch vert.

Crest: a silver-white horse’s head and neck red fancy livery with a green laurel branch in the headstall of the bridle.

Richard did not include chevron; and he chose the motto, “Virtute et Numine” – “By Virtue and Prudence”. Note that this is the same motto as the Creagh Family Tomb in Ennis. He did not use the Gaelic “Beirim Daoibh An Craobh” – roughly, “I bring the branch.” Both of these mottos are listed for the family Creagh. Why would one choose Latin over Gaelic?

Then followed sessions with Alyssa Auerbach, AMDesigns, with the following result: 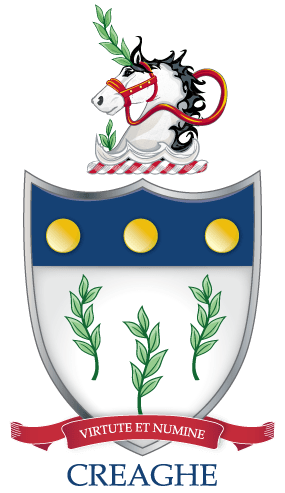 I think this is at least close to what Richard Creaghe had in mind in 1817. The classic descriptions refer to a Nag’s Head. However,” Nag” is not a good way to refer to horse, certainly not a war horse, in the U.S. Therefore, we chose to make the horse look a bit more formidable. I think Richard would be okay with that.

The House of Names in Dublin was contacted, and they made plaques based on our design in 2014. 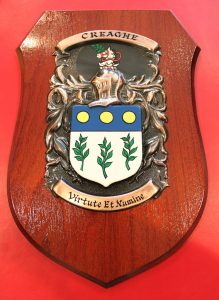 Only then did I find in the Papers of Percy Fitzroy Seton Creaghe as prepared by Merril and Michael Barnett in 1997:

BESANTS were supposed to be derived from a plain flat gold coin.

A letter from Mr. Barnett, also from 1997, made note of the differences in the details of the shield on the mausoleum. He also refers to the crest claimed by Percy Creaghe as being more complicated. I have not seen a representation of this crest, but it would be interesting. He also stated that is not unusual for generations to modify the Arms, and they are then registered.

I do wish I had found these papers before my research efforts, but it was an enjoyable journey anyway.

In response to a request regarding registration, Michael Barnett responded:

UK Arms are controlled by the College of Arms, as noted in the attached article.

It is often wrongly assumed that arms such as the Creaghe arms relate to all descendants of the original holder of the arms warrant. This is incorrect. Arms are issued on application to a particular living person. When he dies, the arms become history, and are not handed down to his descendants, except that the rightful heir can ask for the same arms to be reissued to him. Arms were developed to be on the shield of that warrior, so that people would know who they were fighting.

Descendants of an arms holder would often apply for their own arms, with some variation to the original. When two arms holding families married, they often combined the two arms items onto a new arms for registration. Some arms become complicated for that reason.

For that reason, you will see several versions of the Creaghe Arms. Most of them include the “Nags Head”. This was in commemoration of the Creaghe battle in Ireland when they defeated the Danes, by hiding in the bushes, and disguising their horses by covering their heads with branches. When the Danes approached the city gate, the Creaghe led Irish ambushed them, and won the battle.