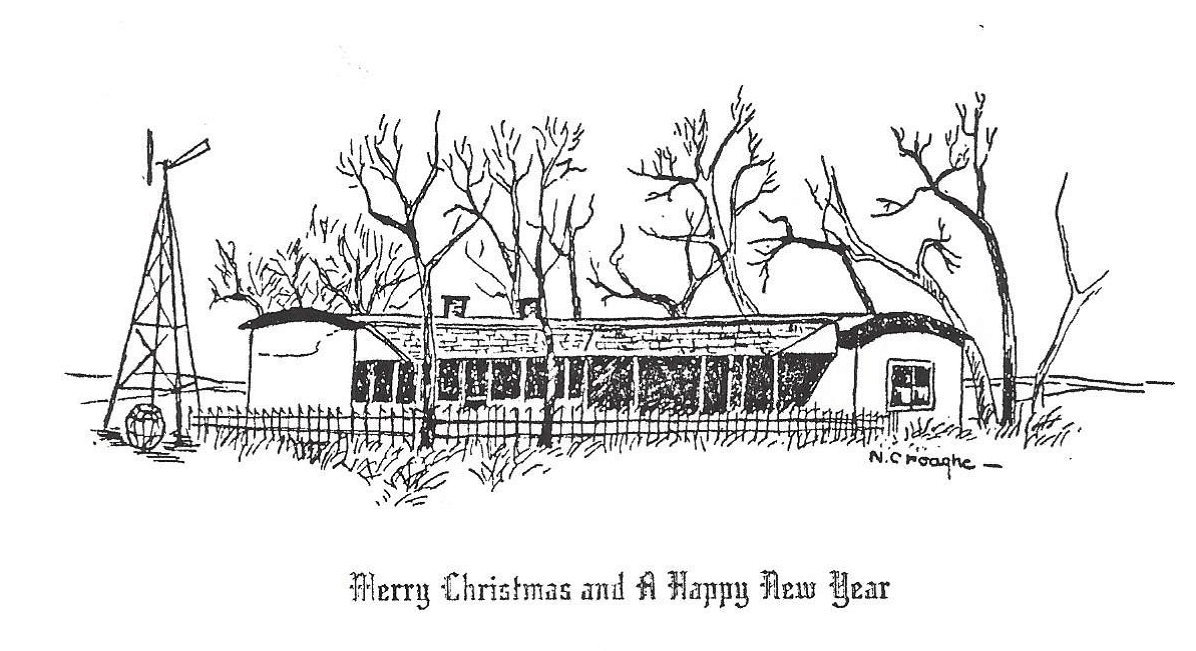 Location: 50 miles south and slightly east of Springfield, Colorado. Ranch house was located in Oklahoma. Ranch in both Colorado and Oklahoma.

Founded: Early 1900’s after family returned to Colorado from Arizona. Mr. Creaghe[St. George] and Gerald (Jack) purchased part of the land and homesteaded the rest. One section per child was applied for and the ranch became dotted with several little adobe and frame huts which the family claimed showed occupancy under the Homestead Act. Every few weeks they would light a lantern in the huts to give the appearance of occupancy.

A three-room adobe cowpuncher’s house was finally located just inside Oklahoma on the Cimarron River south of the southern branch of the Santa Fe Trail.

Long distance management proved ineffective and the house was enlarged by two additional rooms. Richard and Nan Creaghe lived there for several years. After the death of St. George, Jack placed the care of the ranch under Mert Tanner.

In 1929 the Depression hit, cattle prices collapsed, and in order to save the ranch, Jack decided the only alternative was a resident owner, so he moved his wife of two years (Nancy) and baby (Geraldine) to the wild, windy plains. And they were windy. Many wheat farmers in the area simply packed up and left for California. The plowed prairie combined with drought and high winds created the dust bowl. Nancy used to corral the family and hired man and into the root cellar they would go. (Tornadoes frequently were a part of the dust storm.) A tornado destroyed a ranch up the river.

Life was extremely primitive – no running water, electricity or plumbing – all water was carried via buckets from a wooden barrel under a windmill. Nancy had a washing machine, iron, and stove which utilized gasoline and a wood stove. The house was heated with wood stoves. Keith Miller from Keyes, Oklahoma, was employed as the hired hand and remained the ten years Jack and Nancy lived there with sabbaticals to the wheat harvest to make more money.

The economics of the early thirties under Herbert Hoover was among the worst the country ever knew. The ranch was unable to support much over 300 head mother-calf units. Hoover created a philosophy of scarcity which was to kill off the calves and the rancher would be reimbursed. Much as Jack hated to do so, finances forced him. (To provide pasture of foliage to the cows, they were driven into Kansas and parts of Oklahoma to wheat pasture and they were supplemented by stacking young Russian Thistle which was salted and fed later.)

Schooling was a problem. Geraldine was the only child for miles around. A small school over the River was the one she was supposed to attend. Nancy hired the teacher to pick up Geraldine every day and drive her to a one-room school where seven other children all named Cooper attended. The river presented innumerable problems, namely flooding and washing out the bridge. On one occasion Jack waded the river and delivered Geraldine to the teacher, Miss St. John. The bridge washed out and Geraldine was left on the wrong side of the river and had to spend several nights until Jack could make the nearly 100-mile round trip via Boise City to pick her up. Bridges were scarce in those days.

The school was closed when Oklahoma consolidated its schools. The distance and no bus was such a problem that application was made to the State of Colorado and Geraldine was accepted into a two-room schoolhouse in Colorado. Since the family had only one vehicle and Jack needed it, Geraldine was given a $25 stallion to ride to school. This outstanding mount required spurs, spade bit and a quirt to make it over the first hill headed to school. Geraldine learned her early dressage and advanced equitation skills circling this sucker further and further away from the ranch house until she could get him over the first hill. Then once headed north – with simultaneous spurring and whipping – the next five miles could be done in ten minutes. Geraldine was severely reprimanded for the number of broken thermos bottles in her lunch pail.

After about seven months Nancy persuaded Jack to geld this outstanding mount. This occurred only after Jack was summoned to the school to repair a barn the horse had kicked down. Eventually Nancy persuaded Jack to seek a better horse for school transportation. Jack located a lovely five-year-old gelding who had never been touched. Geraldine recalls the spankings she got for being bucked off. Needless to say Geraldine’s equitation students today do not understand this philosophy. In 1938 Jack developed a severe heart condition and died in 1941. Nancy realized that to continue with the recovery of the ranch it needed a full time owner. She consequently placed the Ranch on the market and it sold to Mr. Mathis. It was later sold along with other ranches to a big consortium, who overgrazed and destroyed the land. The house was left vacant and eventually fell down.