The hope is that everyone will find the site informative and enjoyable to explore. It will, however, only be as valuable as the information placed in it. Therefore, please contribute. No piece of information is too small; it could provide a clue to a mystery that is unsolved for generations.

For a submission to the database or for a private communication, please use editorcfhs@gmail.com.

For anything else, the Blog would probably be the most appropriate. 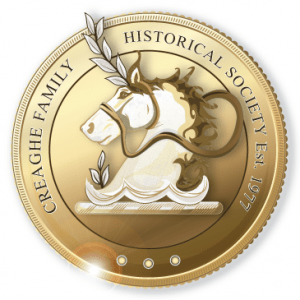 This would be a good time to introduce myself. I am Steve (Stephen B.) Creaghe. I was born in Lamar, Colorado in 1947, graduated from Lamar High School in 1965 (third generation), and considered it to be my home, more or less, until I finished my education in 1973. St. George was my great grandfather, Lawrence P. my grandfather, and Lawrence B. my father.

My interest in our family history began when I was quite young and first heard the family stories. Interestingly enough, most of them came from my grandmother, Nell B. Creaghe. That interest was taken to a new level on our first trip to Ireland in 1997 and again with the family reunion hosted by Helen Gordon Moore the next year. Then, of course, there was the genealogy book she compiled and distributed at that time. With retirement, time was now available; and it seem like this website project would be a good thing to put together.

So, here we are now. Obviously, the project will need broad input to reach its full potential. Please contribute; it could be quite rewarding.

Let me start off with an event that illustrates just that kind of experience our society can facilitate. Michael Gordon Moore (b. 1949) has been most helpful in setting up the website and sharing information from the vast archive he has accumulated from his mother’s work and his own efforts. During a visit to see his collection and work to see if we could find a way to link his extensive family tree project to the website, we discussed various memories of Lamar, Colorado – the fountainhead of the St. George Creaghe family. I mentioned that I recalled standing on Main Street as a child (ca. 1960) and noticing windows on the second story of a building overlooking the street. In those days, in small towns, law offices were commonly located in second-story spaces with the firm’s name lettered on the window’s glass. Michael immediately chimed in, “Yes! Gordon and Gordon!”

That was great. But, neither of us could remember exactly which building. We did agree that it was on the west side, and Michael could narrow it down to one of two corners. Next came work with Google Maps Street View and a phone call to Ruthie Esgar, owner and proprietor of Bettianne’s Gift Shop, also on Main Street. Turns out the shop had been using the old office space for storage since the late 1960s. Google did not show the windows because the building had been covered with a facade years ago.

One of Ruthie’s employees verified the location with photos of the interior.

The door on the left was in a vestibule at the top of the stairs. The photos of the windows were taken from inside the offices and should be mirror images of what you see. The computer would not tolerate them being printed the correct way.

Ruthie then contacted the building’s owner, Veryl Peery. It turns out that I know him and his wife, Sue, from school and church. Ruthie asked if Michael could remove the windows and door panel. Veryl said, “Sure,” and actually arranged for one of his employees to remove the pieces. Small town.

On August 10, 2015, Michael, his son Bryan, brother Malcolm and his wife Ann, and I traveled from the Denver area to the Arkansas Valley to retrieve the artifacts. Even though the building had been enclosed, the windows had been not removed. The space had not been maintained for some time. The roof was in disrepair with predictable results: lots of dirt, dust, debris, hot, musty, dark (no electricity, no windows). A bit spooky, actually. Quite an adventure and lots of fun for the Moore family, who remembered playing on the stairs as children. 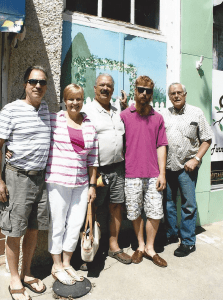 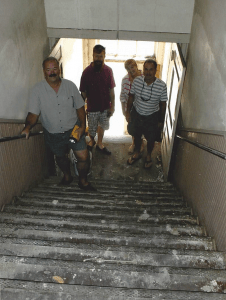 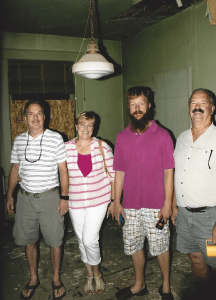 The explorers in what was either Arthur or Woody Gordon’s office.
Note that window has been removed. 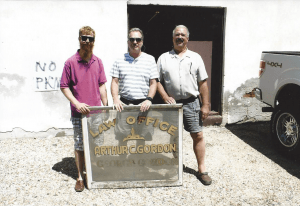 Later, the Moore boys were able to see and tour the home where their mother (or grandmother) grew up (see “Sites”). 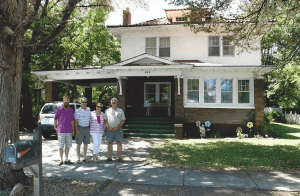 Lucy Corning Brackett and her husband had a similar experience in 2011 when they visited Lamar. They were able to tour St. George Creaghe’s home and had conversations with people who knew Cornings and Creaghes from the past.

This event is an example of what I hope this group can provide all of us: information, contacts, adventures, and new experiences. This has certainly been the case for our family. I hope it works that way for you, too.

This is just the beginning. The site is bare bones at this time and heavily weighted to my experiences. Obviously, that is not enough; we need input from the perspective of the entire family. Any and every contribution will be valuable. Broad input will be the multiplier that will make this project viable, valuable, and fun.

I look forward to your comments, corrections and contributions!